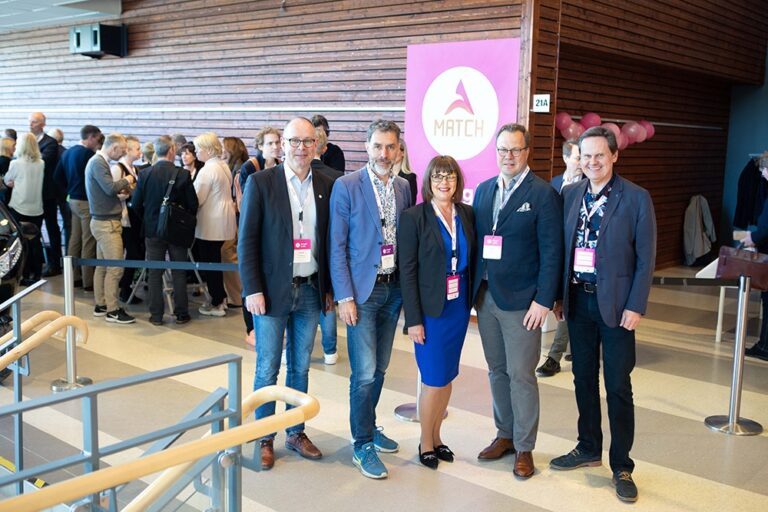 A-match brought the Egg to a boil

Professional, high quality and really great atmosphere – those are some of the comments after the first A-match investor event.

“Presenting well-prepared companies is a success factor, and we’re especially proud to work with half of the companies that were on stage,” says Victor Isaksen of Sting Bioeconomy.

Yesterday was the premiere for the A-match investor event, where potential meets capital. The event is organized by government-owned business promoter Almi, Sting Bioeconomy, Almi Invest, Nordea and Karlstad University. Nearly 100 people had gathered in the futuristic “Egg” room at Karlstad University.

The event day featured ten awesome companies on stage and 60 investors in the audience, with great pitches, new interesting encounters and great atmosphere.

Five out of ten from Sting Bioeconomy

Through a selection process consisting of both on-camera presentations and jury evaluations, ten companies were finally given the sought-after green light to take part in the event.

“In the beginning there were only eight slots, but because the quality was so high we decided to increase the number to ten,” says managing director Anna Lundberg Lundmark of Almi Företagspartner in Värmland.

Sting Bioeconomy already works with half of the companies that were on stage – a confirmation of their high quality.

“There were many qualified applicant companies wishing to pitch at A-match, and great to see many of the companies we work with appearing on stage,” Victor Isaksen continues.

To optimize their pitching, the companies had spent four weeks honing their presentations together with a designated pitch coach with the purpose of making the most out of their seven minutes on stage. And coaching seems to have been a success factor, not only for the companies but also for the investors.

“Providing the companies with the best chances to succeed is part of our concept. Demonstrating well-prepared candidates that are ready for investment increases the motivation to invest, and will hopefully make investors return the next time – on 19 November,” Victor Isaksen adds.

One of the Sting Bioeconomy companies was Bright Day Graphene. Based in Stockholm, they have developed a unique process for producing large volumes of graphene from biomass. This bio-graphene has nearly the same amazing conductivity as the CVD graphene, but in a bulk product.

“Excellent event, actually the best we have taken part in. Definitely worth the trip from Stockholm – we’ve made so many new contacts and it’s been a lot of fun. Thanks to the preparation before, it all felt very thought-through, and we connected well with the investors. We liked the scheme of starting with seven-minute pitches to arouse curiosity, and afterwards having the opportunity to meet in an organized mingle,” says Malin Alpsten of Bright Day Graphene.

Sustainability was the red thread

A-match is an event that welcomes outstanding companies from various industries. But the audience found one aspect that characterized almost all of the ten companies: sustainability.

Now we are looking forward to following up how many of the companies managed to raise the adequate capital through A-match.

Fibu has a potential substitute for plastic in protective materials

Fibu has developed an organic and sustainable protective material – serving the same purpose as polymer foam and bubble wrap – from wood fibres. With this

Lixea is the startup that has taken London to Värmland to convert waste into value. Their pilot plant was recently started in the LignoCity premises