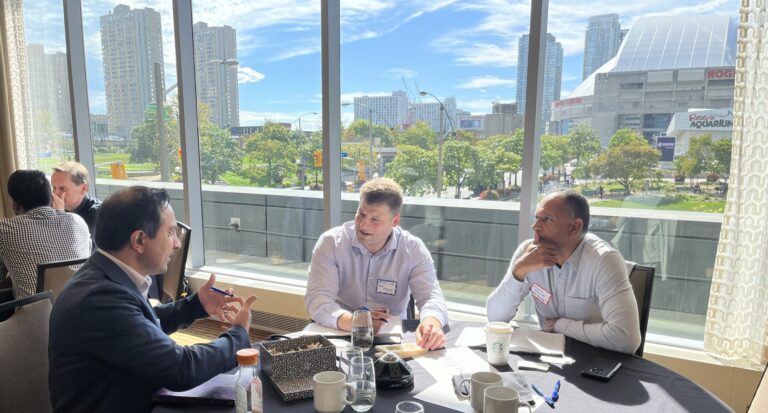 A delegation of around fifty Swedes participated in the Swedish–Canadian innovation days that took place in Toronto on 20–23 September, organized by Business Sweden on behalf of Vinnova (Sweden’s innovation agency). Sting Bioeconomy was there in order to match Swedish startups with Canadian organizations.

Canada is the world leader when it comes to export of paper, pulp and sawn wood. Canadians are also strong in innovation and research.

“Sweden, however, is more advanced in terms of startups and forest production, and in many respects it’s a more mature market for new products based on materials from the forest. When our startups are to expand in a larger global market, Canada provides great leverage, not least to the United States. So for several reasons, a close relationship between our countries is of major importance for the transition into a green economy,” says Sting Bioeconomy’s managing director Victor Isaksen.

Sting Bioeconomy, Paper Province, as well as representatives of several Swedish innovation operators and startups, travelled to Canada to be inspired and make new valuable contacts during the innovation days in the end of September.

Sting Bioeconomy’s main focus was the bioeconomy event, arranged together with Paper Province and Canadian partner Cribe, co-funded by IHUBS. The day featured a workshop as well as matchmaking between startups and organizations in the field of bioeconomy. The purpose was to identify synergies and potential collaborations.

Speed matching in a bioeconomy setting

In the afternoon, Sting Bioeconomy organized a matchmaking event for, on the one hand, Swedish startups Richter Life Science, Fibu, Reselo, Celfion, SentianAI and Lignin Industries, and on the other hand Canadian organizations Plantee Bioplastic, CKD Pack, West Fraser, Element 5, FPInnovation and Enerlab. The matchmaking was very successful, resulting in many potential collaborations.

Fibu has developed protective products from wood fibres that can reduce the use of disposable plastic. Founder Majid Alimadadi was very pleased with the event.

“We had two really good meetings: one with a large company that we can see as a future partner, and one with a potential major customer. Also, the latter will come to Sweden in two weeks, and I invited them to us. There’s also a third interesting company that I’m going to meet one of these days,” says Majid.

Agneta Richter-Dahlfors is the founder of Richter Life Science – a company that has developed a unique way to, among other things, extract cellulose and lignin from biomaterials. She was also happy with the day.

“The balance between big companies and small startups was excellent, because we live in such different worlds.  For the progress of our small companies, it’s useful to gain insight into how the big players think. Two meetings were real hits, and the others were pleasant encounters where we also learned things.”

Henrik Otendal is a co-founder of Reselo, a company that can create fossil-free rubber from birch bark. He asserts the matchmaking event was very rewarding, as it resulted in future concrete collaboration opportunities.

“The contacts we made are invaluable. I found at least two really good matches that wanted to move forward with us: one was a huge company that makes packaging for the automotive industry, using a material that ours could replace. We’re going to send them material samples so that they can test our product in a specific application. They also have an investor network, and will now make arrangements for us to pitch for them in December.”

“Sweden–Canada is no doubt a win-win collaboration”

Victor Isaksen, very pleased with the matchmaking, emphasized that trips of this type encourage him because they bring about tangible results.

“We have a lot in common with Canada, and we see great opportunities in the fact that several startups come to us to verify their technology and market potential in Sweden. Then the next step will be the North American market opening up. We’re already speaking with relevant companies, so this looks very exciting for the future. Sweden–Canada, that’s no doubt a win-win collaboration,” Victor wraps up.

Reselo sets out to revolutionize the rubber industry

Startup company Reselo has developed a process for producing rubber from birch bark. This innovation means that the forest raw material, which is otherwise just

As many as four dragons were interested in the electric-powered boat when Bowter pitched at the Swedish version of Dragons’ Den last week. Now the